In a previous data report we observed the leaders of the two right-wing populist parties in the Netherlands, Geert Wilders (PVV) and Thierry Baudet (FvD), to be the candidates with the strongest social media presence, with the exception of Mark Rutte’s (VVD) Prime Minister official account. Wilders (PVV) has ~ 850.000 followers on Twitter, ~ 430.000 on Facebook, and ~ 170.000 on Instagram, and Baudet (FvD) has ~ 250.000 on Twitter, ~ 95.000 on Facebook, and ~120.000 on Instagram. Most of the other party leaders running in the upcoming March 17th election don’t even hit the 100.000 follower mark for any of these three platforms. Social media is gaining relevance as a battle ground for elections and political discussions more broadly, and the right-wing populist parties seem to dominate the scene in the Netherlands. In this report we dig deeper into the social media dynamics of these two candidates.

In this report we explore the Twitter, Facebook and Instagram activity of Geert Wilders (PVV) and Thierry Baudet (FdV). For comparision, we also explore the activity of Mark Rutte’s Prime Minister accounts, as well as Jesse Klaver’s (GL). In particular, we explore:

We have collected all the messages they posted on these three social media platforms for about 6 months: from August 15th 2020 to February 22nd 2021. 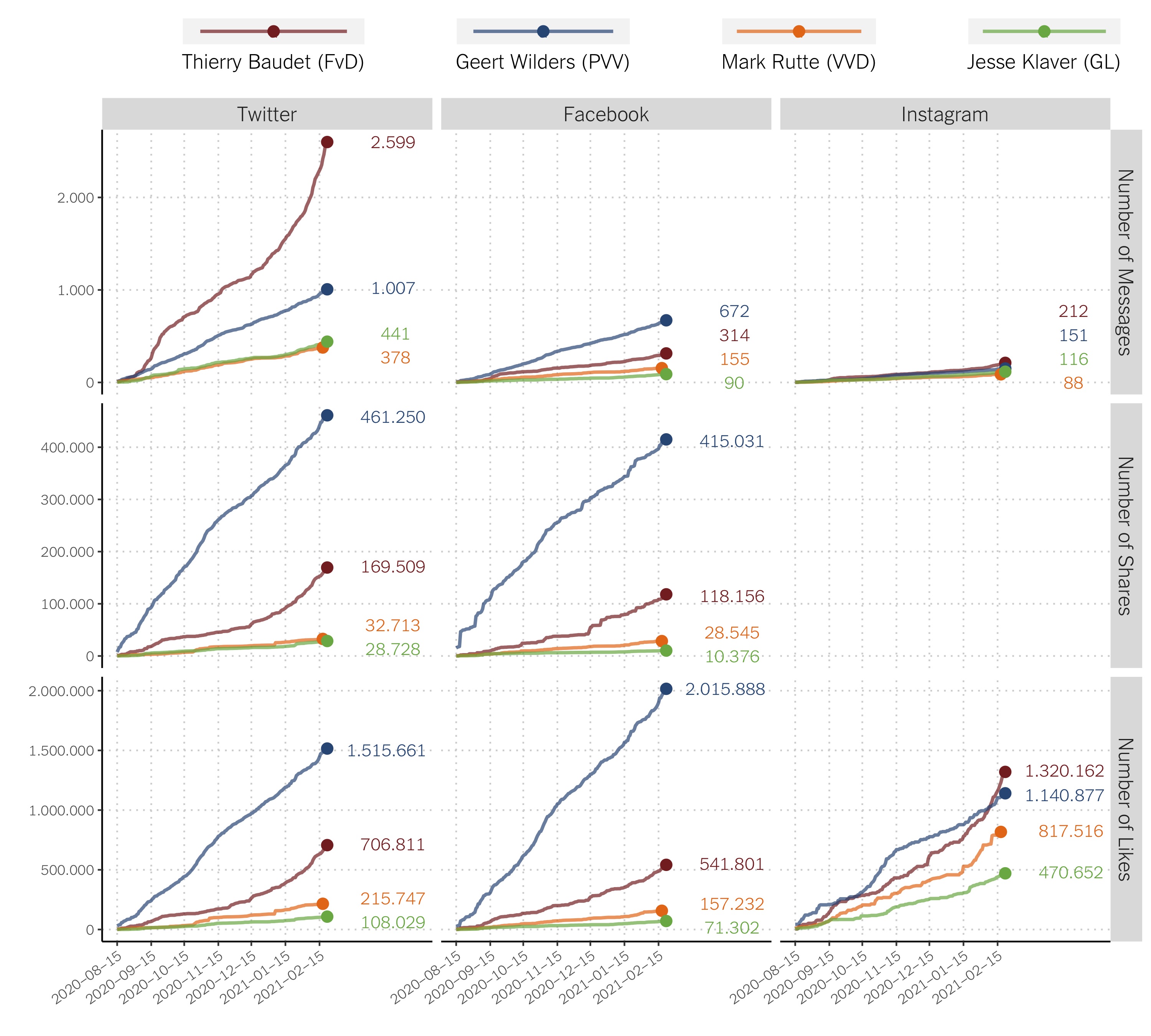 We have also collected data about how often other users shared and liked the messages we gathered during this time period. 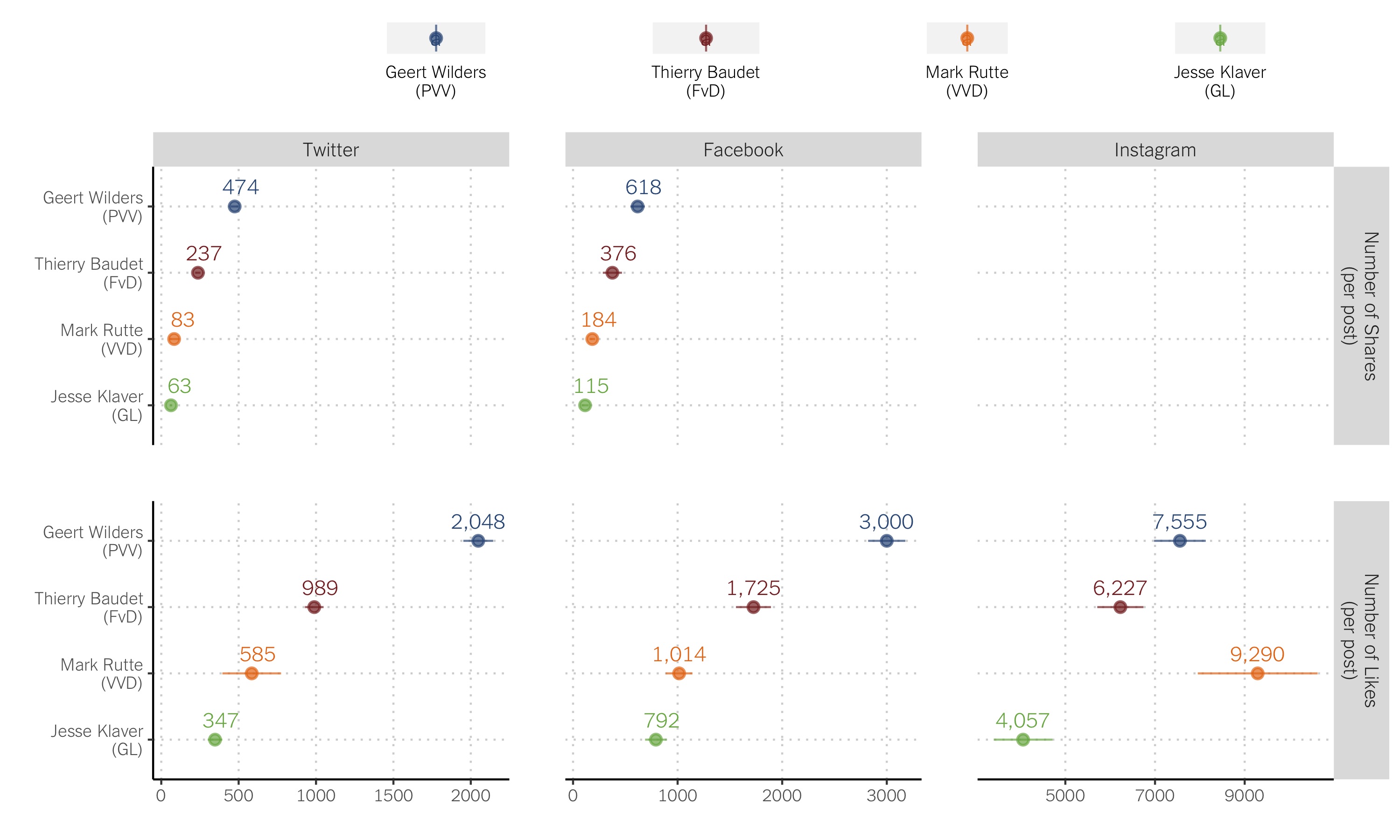 How much do they rely on their core (Twitter) supporters to spread their message around?

For Twitter, we can get detailed data as to which particular user shared the messages sent by Wilders and Baudet. We used this data to explore the pool of retweeters of Wilders, Baudet, Rutte, and Klaver. For those who retweeted at least one tweet from a given candidate, we calculated for what percentage of all the retweets of that candidate they are responsible. In the figure below we sorted the retweeters (x-axis) from most to least active, and in the y-axis we looked at the cumulative number of retweets for a given candidate. The figure indicates for what percentage of the retweets the most active e.g. 1% or 10% (etc.) of retweeters are responsible for. 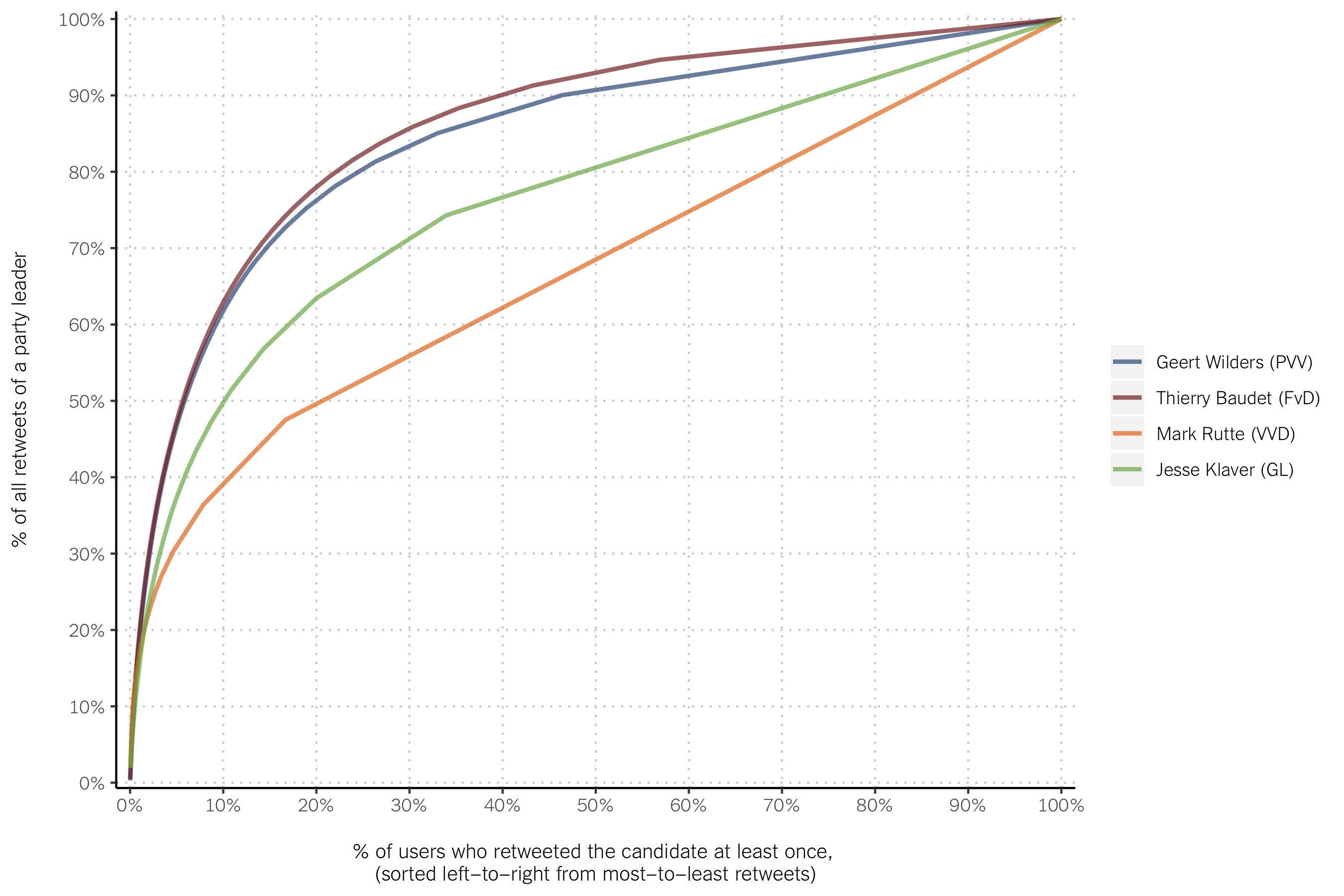 What issues do they discuss?

We looked at some of the words these four candidates use most often in their Twitter, Facebook, and Instagram posts. Then we calculated the percentage of message containing each of these words. 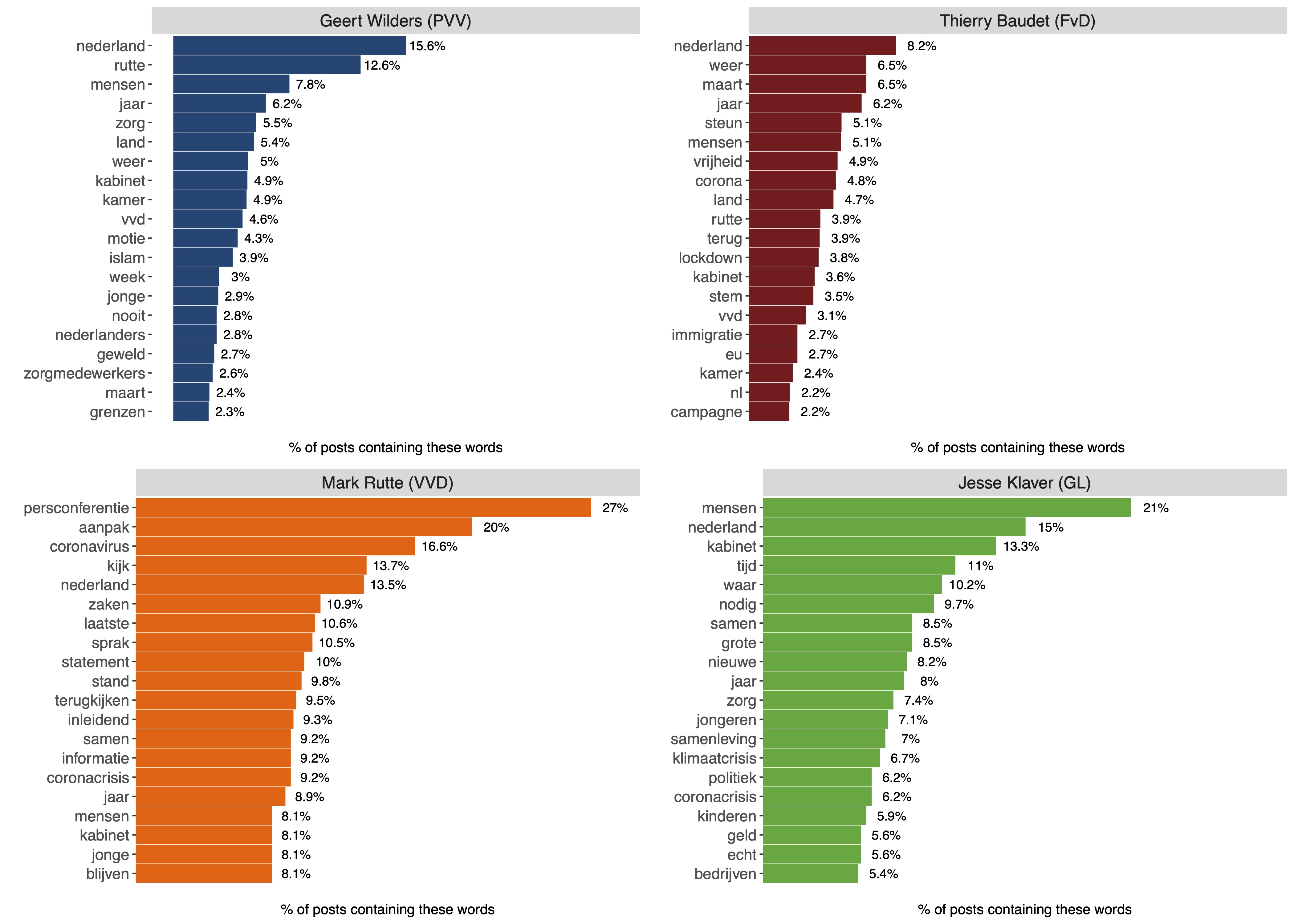 What issues get more traction on social media?

We also looked into how often the posts containing those words are shared on Twitter and Facebook. 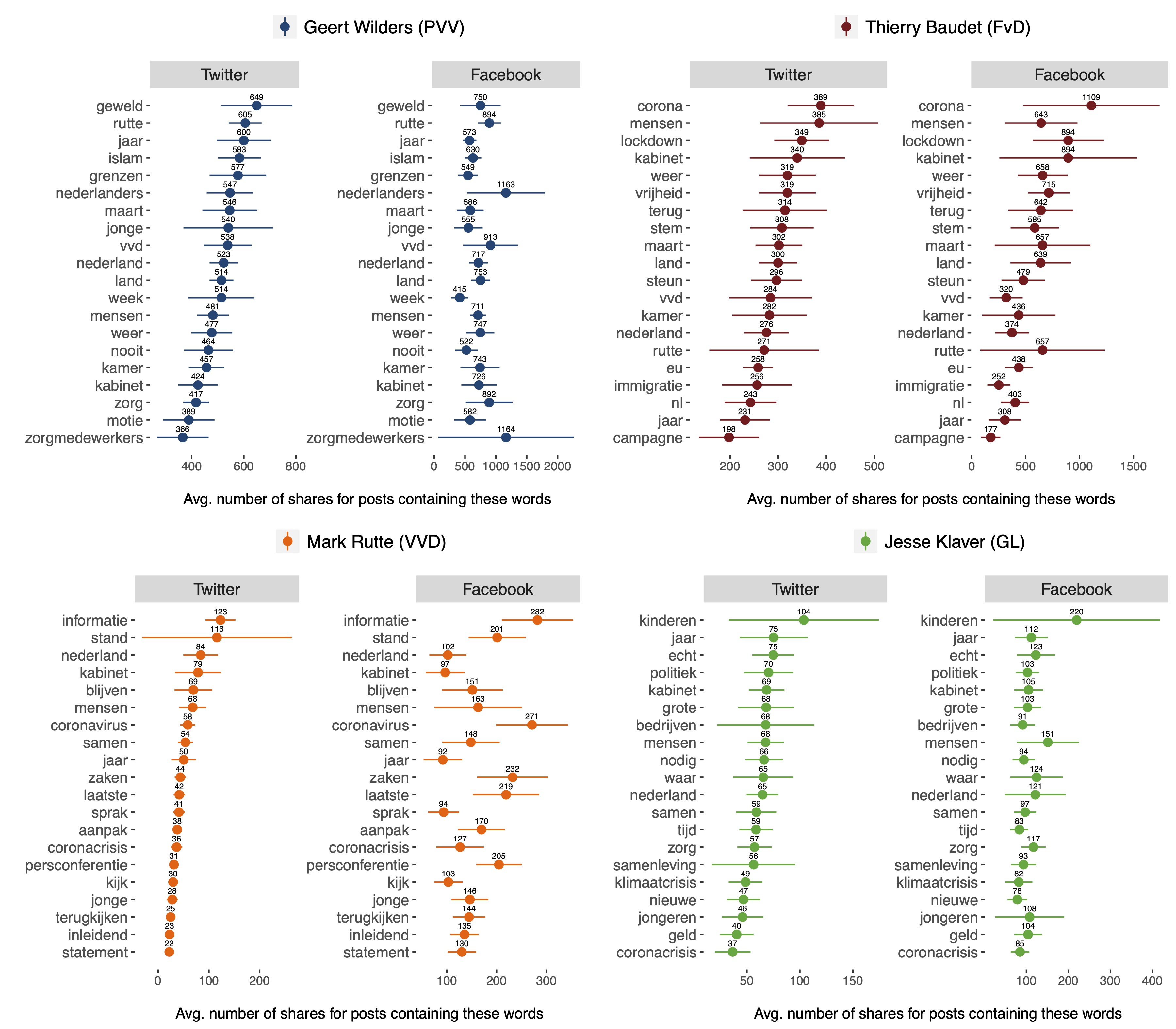