Exploration of media and trust before the campaign

This report gives an overview of the political and media landscape at the start of the campaign for the Dutch 2021 Parliamentary Elections. This analysis is based on the first wave of our panel survey with in total 2.400 respondents. We asked them what their vote intention is for this election, how they voted in the previous election, how well they trust various media and institutions, and what media they consumed in the past weeks.

Let’s start this exploration by a look at the demographics of the voters, especially age and education.

Media use by Age and Education 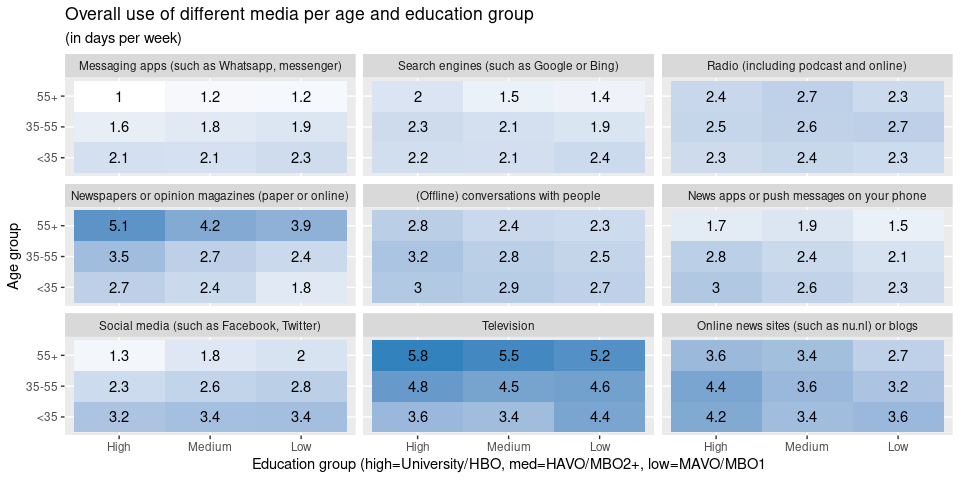 As we can see, Television is the most widely consumed news channel for all age and education groups, but with a clear smaller share for respondents under 35, except for those in the lowest education group. Unsurprisingly, print newspapers ad opinion magazines are mostly consumed by highly educated older voters, while younger voters prefer online news channels, especially the highly educated voters younger than

Vote intention per Age and Education 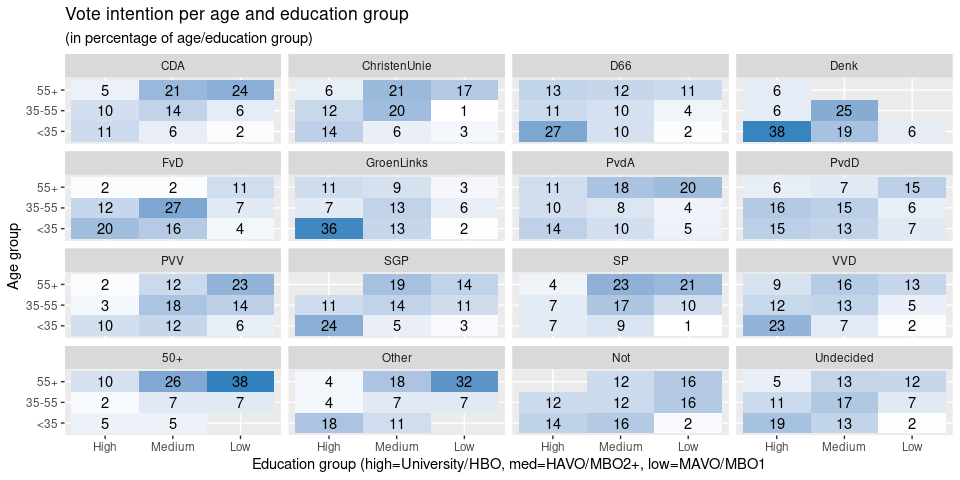 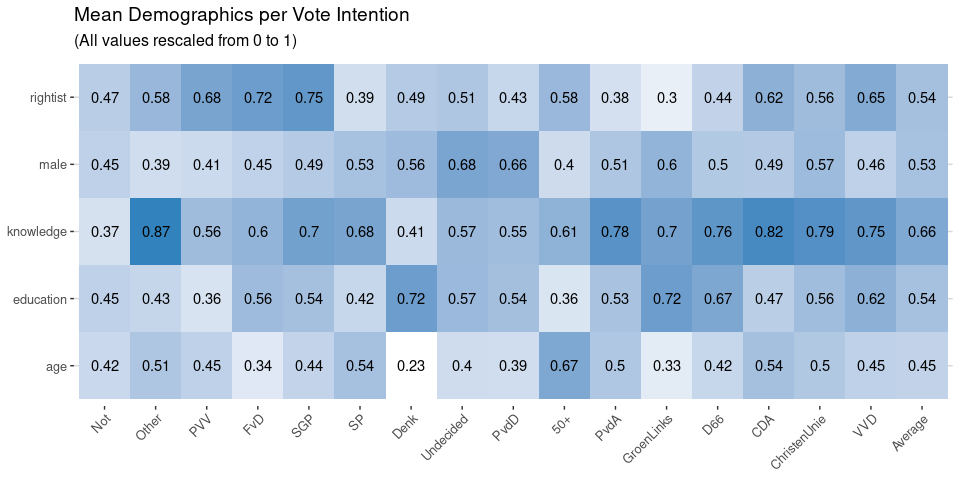 The able above shows the “mean voter” for each party, where each demographic is rescaled to range from 0 to 1. Voters for centrist parties have on average a bit more political knowledge, while the smaller parties D66, GroenLinks and Denk have the highest level of education.

Interestingly, undecided voters are more likely to be male, younger, slightly better educated, but less knowledgeable about politics than the average voter.

Placing each party by the demographic of its mean voter, we get an alternative electoral compass: (color indicating average position of respondent on left-right scale) 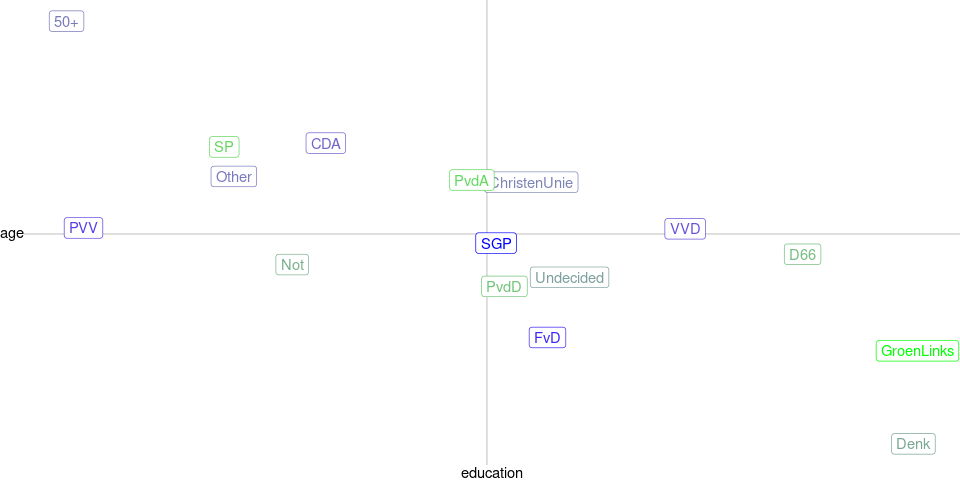 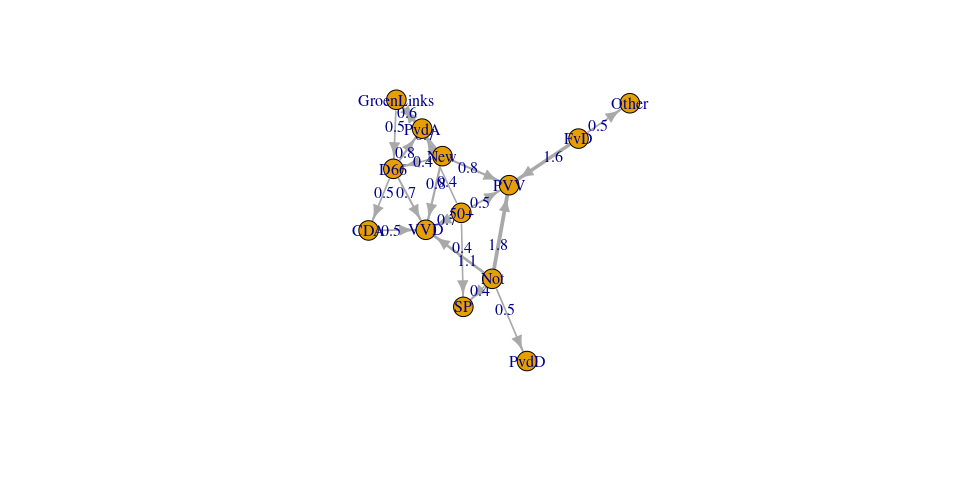 The above shows changes between current vote intention and the self-reported previous vote (ignoring undecided voters). Interestingly, PVV does not draw new voters from existing parties apart from the (imploded) 50+ and FvD, but mostly draws on voters that did not vote in the previous election, either from choice or because they were inelibible (i.e. new voters). VVD also draws from both groups and from 50+, while also drawing from the coalition parties CDA and D66. Non-voters in 2017 also now consider SP and PvdD. Thus, while VVD and PVV do not compete directly, both do draw from the same pool of new and disgruntled voters.

Media Use by Vote Intention 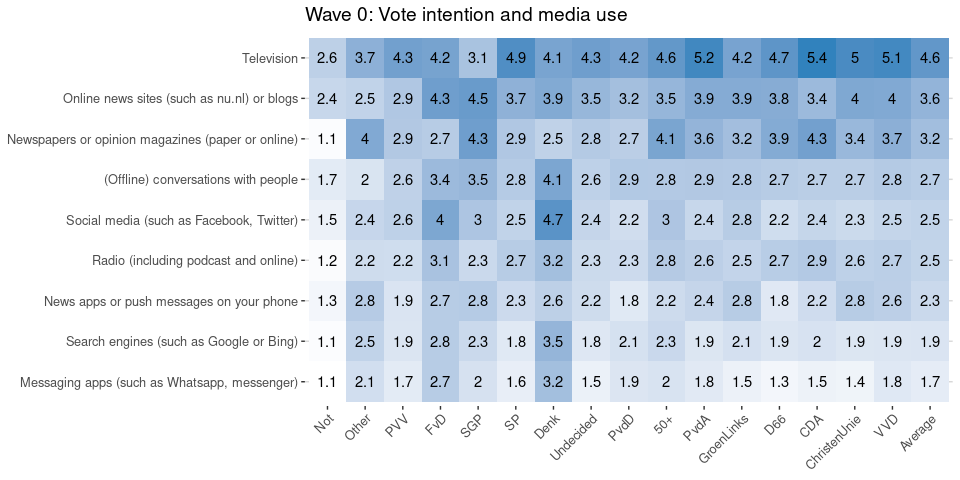 In the competition for voters the media play a crucial role. The table above shows overall media use by current vote intention. As seen before, TV is the most frequently used channel, followed by online nad print news. Overall, voters for the centrist parties consume more news, while non-voters and voters for especially PVV consume signifianctly less news in all channels. Both FvD and Denk voters rely more heavily on social media and especially less on print media.

See the last part of this report for data on use of particular titles or sites within each category.

One crucial question is whether people have trust in media and democracy. We have asked respondents to rank their trust in a number of institutions on a scale of 0 to 10, and we also asked them to rank a list of specific media channels. 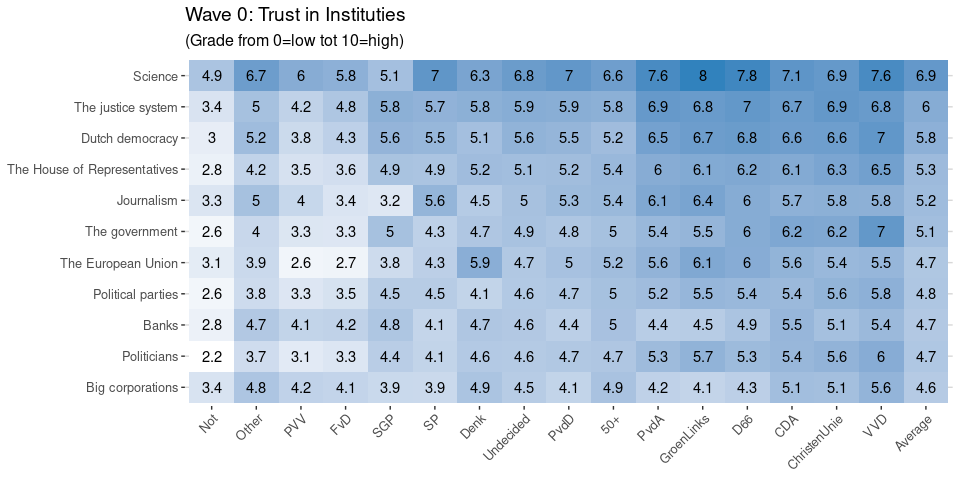 The table above shows the trust in a number of institutions. Most respondents have relatively high trust in science, the justice system, and democracy. When looking at journalism and specific political institutions, trust is lower, and trust in banks and corporations is even lower. 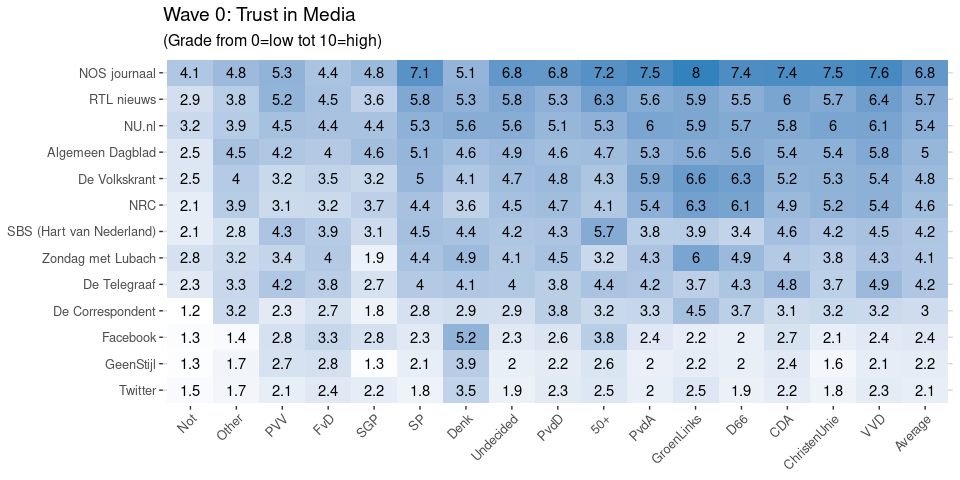 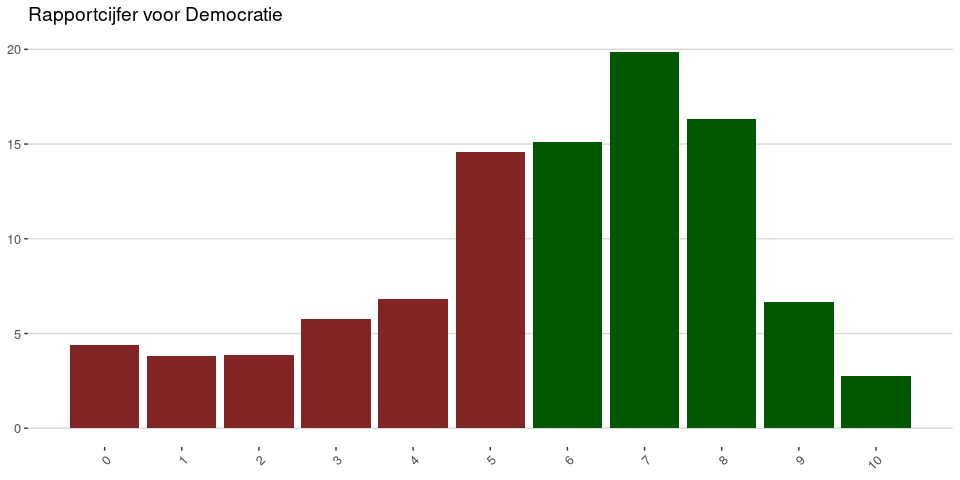 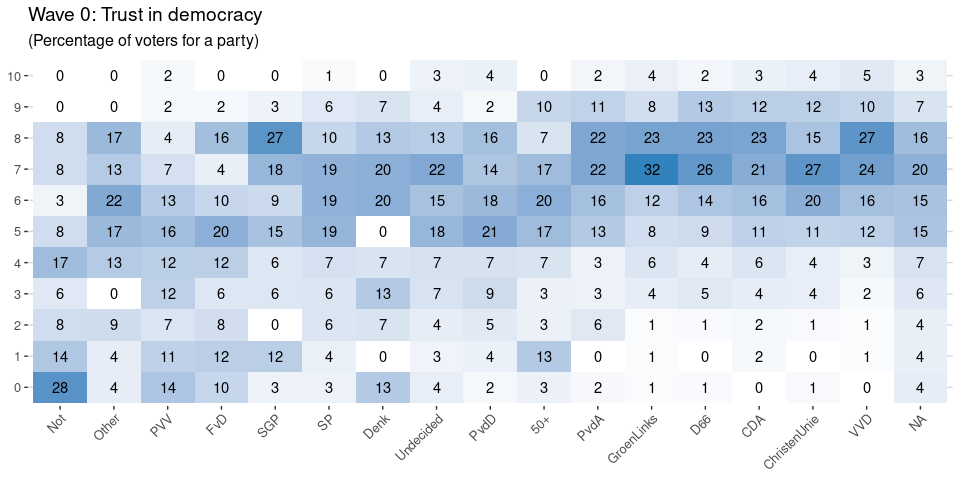 Use of particular media titles / sites 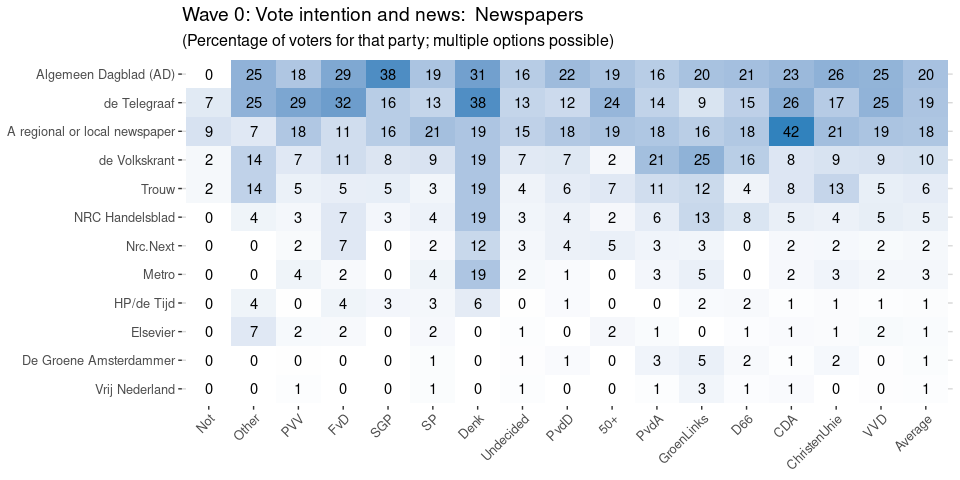 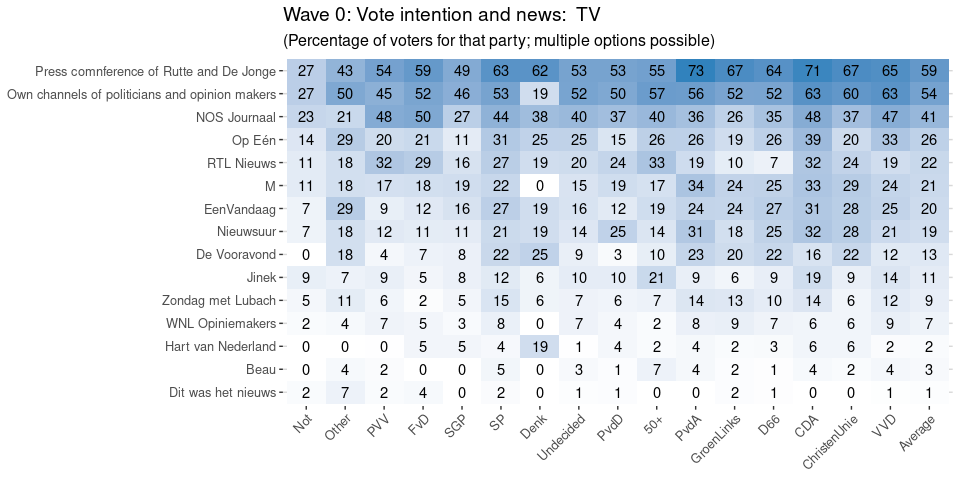 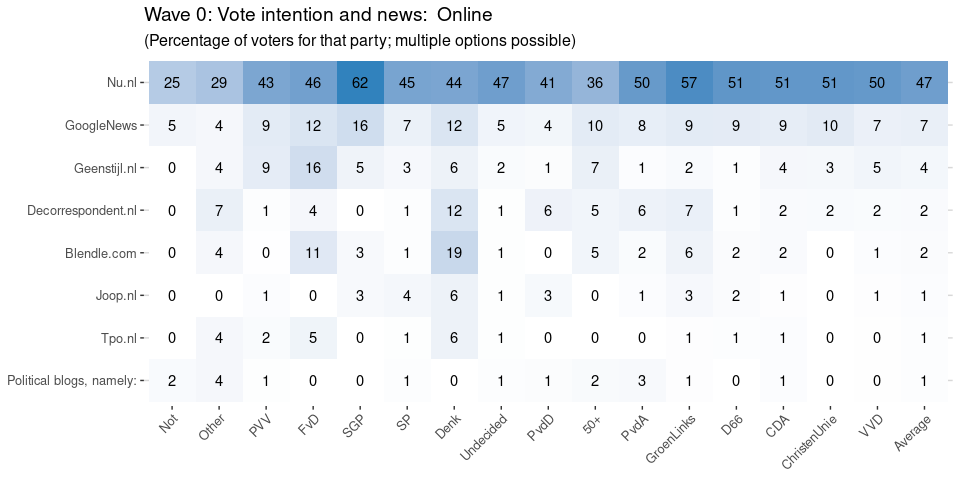 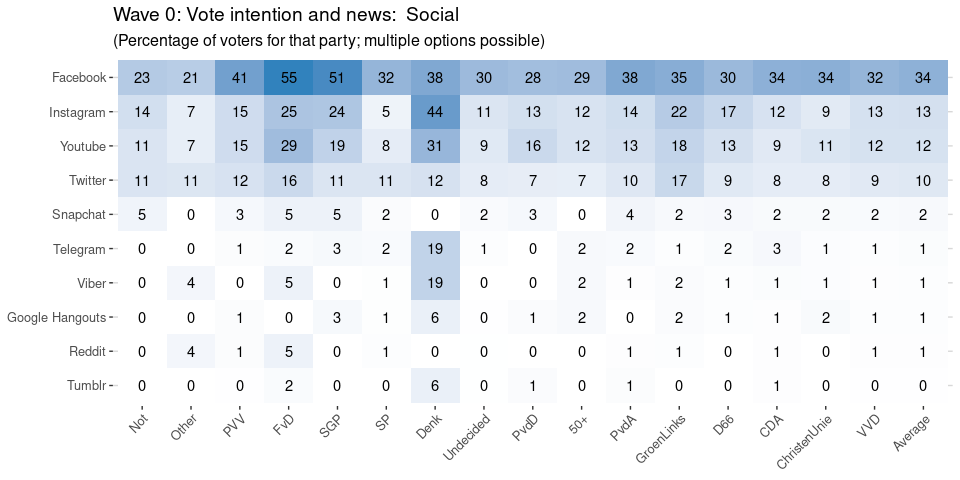 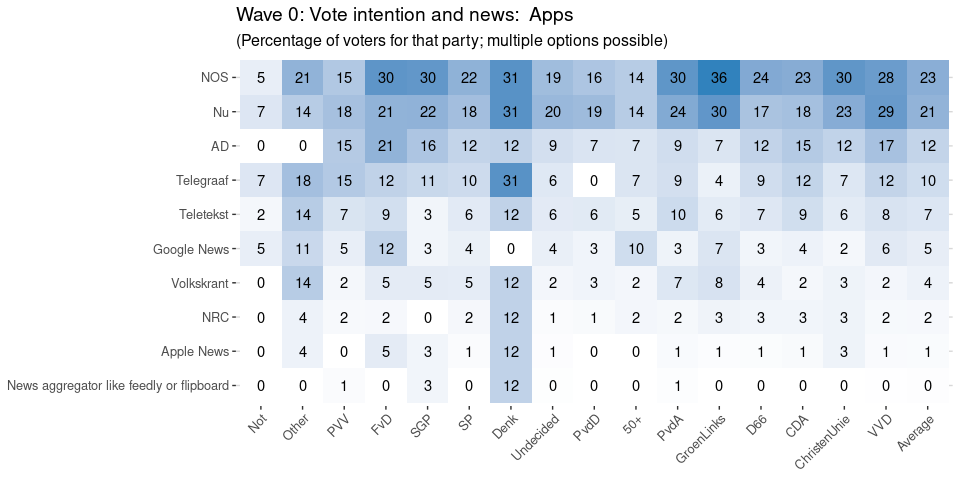