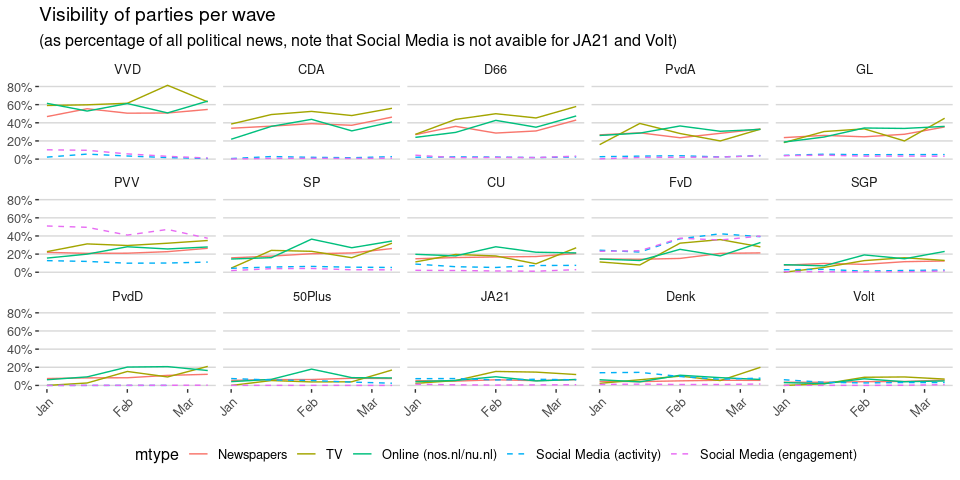 Overall visibility on traditional media (including online) favours coalition parties VVD, VDA, D66 followed by the main opposition parties. This overall pattern is especially striking on TV, where these parties are each mentioned in about 60% of news and current affairs shows. Over time, CDA and D66 gradually increase their share across all media, while VVD remains mostly constant.

In the final weeks, most parties increase in visiblity, especially on TV, as their are more opportunities for all party leaders to appear on TV.

Forum starts out with low visibility, but quickly climbs to being mentioned in 20-40% of all political news. Social media also show a very clear picture: although many parties are somewhat active on social media, FvD wins hands down in terms of their activity, and FvD and PVV are the only parties with substantial engagement on social media (likes, shares, mentions)

Does the voter take notice? 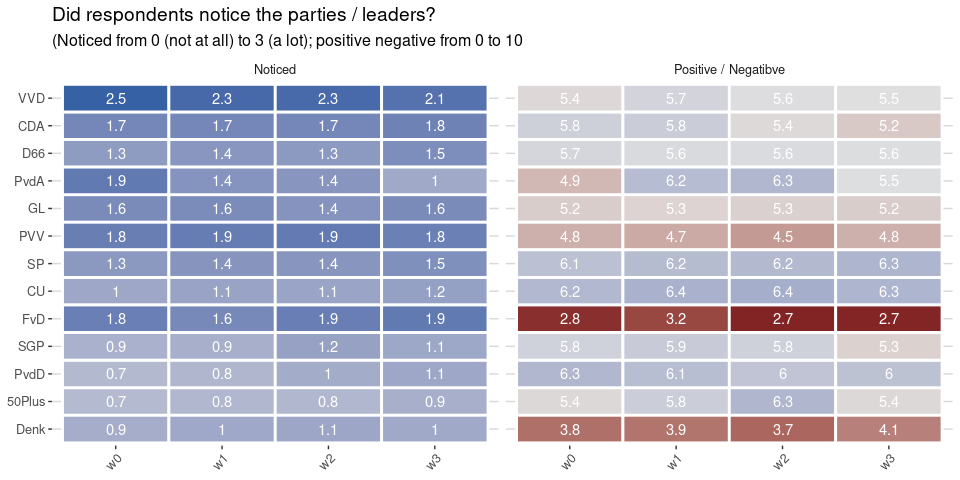 Looking at whether respondents noticed the various parties, overall we see that VVD, PVV and FvD are most noticed. The latter two are interesting since they are less visible in the mainstream media. So, either they are more noticeable when they are present, or the notice is (also) based on social media presence.

Most parties are not evaluated particularly positive or negative, with a clear exception for PVV, FvD and Denk, whose media performance is evaluated very negatively by the respondents. This confirms the possibility that PVV and FvD are more noticeable when present, but clearly mostly in a negative way.

Looking at change over time, we see that PvdA and GL become less noticeable, matching their decreasing visibility on TV. D66 and CDA on the other hand are increasingly noticed.

PvdA and 50+ are evaluated more positively in February, but loses this edge in the final weeks. CDA gradually decreases in favourability from 5.8 at the start of the campaign to 5.2 near the end. The other parties remain fairly constant.

Does notice depend on alignment of repondent? 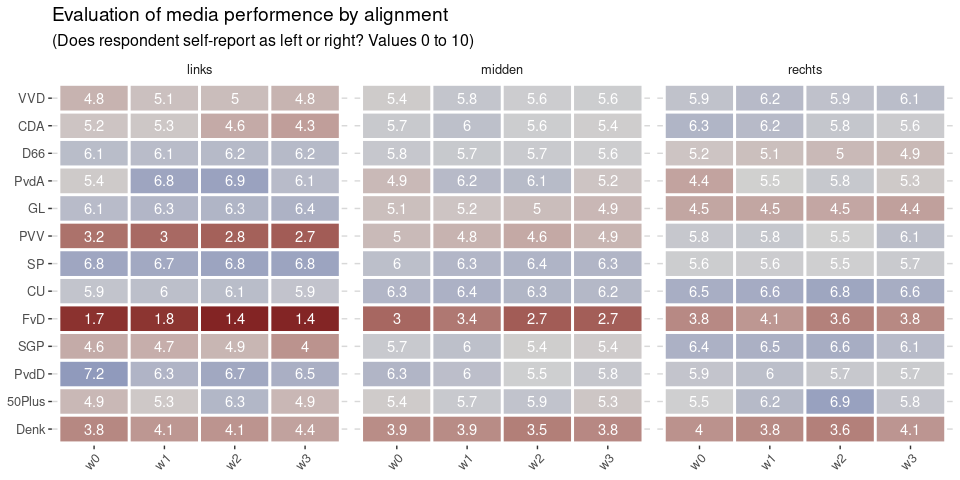 Notice of parties (visibility) does not really depend on the ideological alignment of the respondent.

The number of undecided voters (and non-voters) is becoming smaller as the election draws near:

Media use of undecided voters

Last month, we saw that undecided voters were on average less interested in news and politics. If we look at the group of voters that were undecided at the start of the campaign, how did their media use change? 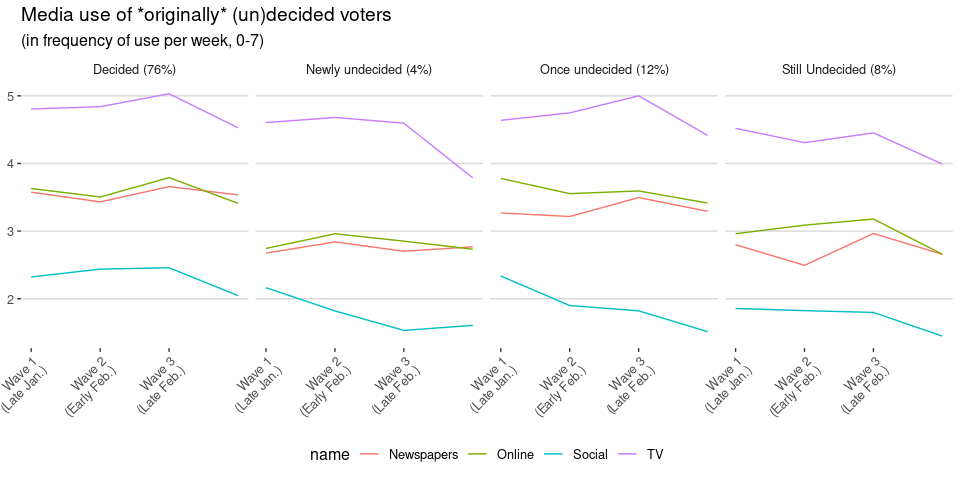 Who are the undecided voters? 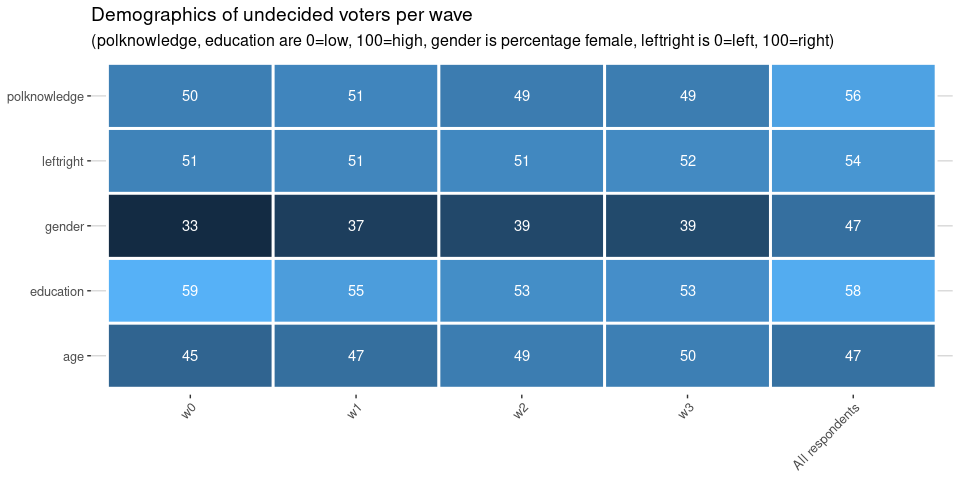 The table above shows average score on left-right self placement, political knowledge, education, age, and gender. This shows a clear shift in who those voters are: The original undecided voters were younger, more often male, higher educated and slighyly more leftist than average. In constrast, the current undecided voters are centrist and older than the average respondent. Interestingly, even though this group has a slightly lower overall education, they score better on political knowledge, probably as a result of being older.

Where do undecided voters go to and come from? 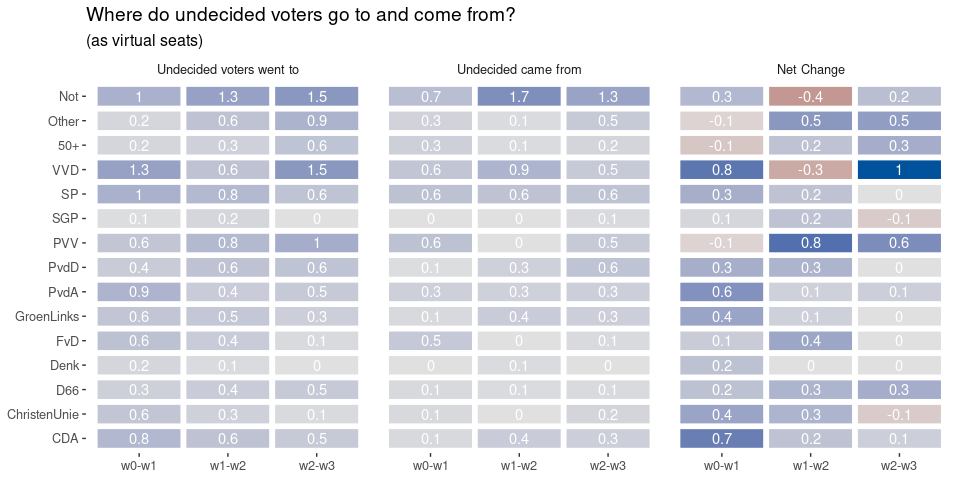